Romania will participate in the Own Eurovision Song Contest 43. The Romanian entry will be selected through an national selection. The theme of the national final is "Best of 2015".

Out of 32 entries that were in the National Selection, on December 31, 2015 the winner was revealed as Alexandra Stan. She will represent the country with her single, I did it, mama!.

Selecția Națională 43 is the national final format developed by TVR in order to select Romania's entry for the Own Eurovision Song Contest 43. The competition was organised by the head of the Romanian delegation. TVR opened a submission period for artists and composers to submit their entries until 24 December 2015. A total of 32 entries will be received by the broadcaster by the end of the deadline. Only 2015 released song are allowed. An expert committee will review the received submissions between 25 and 28 December 2015. Each juror on the committee will rate each song between 1 (lowest) and 10 (highest).

The 32 competing entries will be divided into four semi-finals, with eight compositions in each. From each semifinal, the songs that earned first and second place will go directly to the final, while the songs that place third and fourth will proceeded the Second Chance semi-final. The bottom three songs in each semifinal will be eliminated from the competition. After the combination of the jury votes, the entries that scored the highest will be selected for the national final. The competing entries will be announced during a press conference on 29 December 2015. 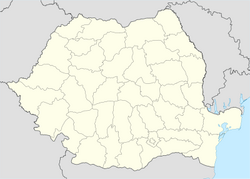 Sibiu
Cities that the shows were held in.

At Own Eurovision Song ContestEdit

Romania will participate in one of the two semi-finals. The country was draw to perform first in the first semifinal. Unfortunately the country didn't manage to qualify for the Grand Final, missing it by only one place.

Retrieved from "https://own-eurovision-song-contest.fandom.com/wiki/Romania_in_Own_Eurovision_Song_Contest_43?oldid=65160"
Community content is available under CC-BY-SA unless otherwise noted.