Own Eurovision Song Contest 53, often referred to as OESC #53, is the 53rd edition of Own Eurovision Song Contest. It took place in Yerevan, Armenia, following Nune Yesayan's win in the 52nd edition with the song "Es u du". It was the first time Armenia had hosted the contest. The contest was held at the Karen Demirchyan Complex, and consisted of two semi-finals and the final. The three live shows were hosted by Iveta Mukuchyan.

The winner was Finland with the song "Mayday" performed by Sini Yasemin. This is country's third victory, the last one being in the 48th edition. The podium was completed by Switzerland, which managed to tie their best result achieved back in the 7th edition, followed by Ukraine and Cyprus, which achieved the best result since their last win. San Marino and Monaco finished on the fifth and sixth places respectively, the latest one also getting tied with their previous best result. The host nation Armenia finished on the 20th place. 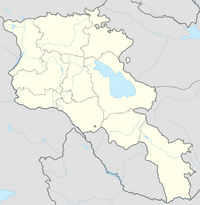 Yerevan
Location of the host city.
Yerevan is the capital and largest city of Armenia as well as one of the world's oldest continuously inhabited cities. Situated along the Hrazdan River, Yerevan is the administrative, cultural, and industrial center of the country. It has been the capital since 1918, the fourteenth in the history of Armenia and the seventh located in or around the Ararat plain. The city also serves as the seat of the Araratian Pontifical Diocese; the largest diocese of the Armenian Apostolic Church and one of the oldest dioceses in the world.

With the growth of the Armenian economy, Yerevan has undergone major transformation. Much construction has been done throughout the city since the early 2000s, and retail outlets such as restaurants, shops, and street cafés, which were rare during Soviet times, have multiplied. As of 2011, the population of Yerevan was 1,060,138, just over 35% of the Republic of Armenia's total population. According to the official estimate of 2016, the current population of the city is 1,073,700. Yerevan was named the 2012 World Book Capital by UNESCO. Yerevan is an associate member of Eurocities.

Karen Demirchyan Sports and Concerts Complex, also known as Demirchyan Arena, Sports & Music Complex, or simply Hamalir (for complex in Armenian), is a large sports and concert complex with 184 stairs leading up Tsitsernakaberd hill which dominates over the western parts of Yerevan, near the Hrazdan River gorge.

The complex has a unique design, an outside view of the whole construction reminds the shape a big bird opening its wings. Its architectural concepts include a turning tribune of 1,008 seats, that can rapidly connect the two big halls to reveal additional seating, a concept for which the architects were awarded the USSR State Prize, the highest of its kind, in 1987. The main arena used for sporting events and concerts has a capacity of 6,000 seats, expandable to 8,800 seats.

The forty semi-finalists were allocated into six pots, based on their geographical place and cultural similarities. Drawing from different pots helps in reducing the chance of so-called neighbour voting and increasing suspense in the semi-finals. Each time a country was drawn from the pot, its semi-final and half of the semi-final was determined.

Twenty countries participated in the first semi-final. Armenia, Montenegro and Russia also voted in this semi-final.

Twenty-six countries participated in the final, with all 46 participating countries eligible to vote.

Further information: List of countries in the Own Eurovision Song Contest
Eligibility for potential participation in the Own Eurovision Song Contest requires a national broadcaster with active OEBU membership that would be able to broadcast the contest. As in every edition, an invitation to all the members have been sent in order to confirm whether they will participate or not. The following list of countries declined stating their reasons as shown below.

Retrieved from "https://own-eurovision-song-contest.fandom.com/wiki/Own_Eurovision_Song_Contest_53?oldid=89704"
Community content is available under CC-BY-SA unless otherwise noted.