Own Eurovision Song Contest 52, often referred to as OESC #52, is the 52nd edition of Own Eurovision Song Contest. It took place in Cork, Ireland, following Lyra’s win in the 51st edition with the song "Emerald". It was the first time Ireland had hosted the contest - 52 editions after the country made its debut. The contest was held at the Páirc Uí Chaoimh, and consisted of two semi-finals and the final. The three live shows were hosted by Nadine Coyle. 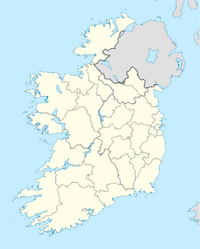 Cork
Location of the host city.
Cork is the second largest city in Ireland. Located in the south-west of Ireland, in the province of Munster, since an extension to the city's boundary in 2019, its population is c.210,000.

The city centre is an island positioned between two channels of the River Lee which meet downstream at the eastern end of the city centre, where the quays and docks along the river lead outwards towards Lough Mahon and Cork Harbour, one of the largest natural harbours in the world.

Originally a monastic settlement, Cork was expanded by Viking invaders around 915. Its charter was granted by Prince John in 1185. Cork city was once fully walled, and the remnants of the old medieval town centre can be found around South and North Main streets. The third largest city by population on the island of Ireland, the city's cognomen of "the rebel city" originates in its support for the Yorkist cause in the Wars of the Roses. Corkonians sometimes refer to the city as "the real capital", a reference to its opposition to the Anglo-Irish Treaty in the Irish Civil War.

Páirc Uí Chaoimh is a Gaelic games stadium in Cork, Ireland. It is the home of Cork GAA. The venue, often referred to simply as The Park, is located in Ballintemple and is built near to the site of the original Cork Athletic Grounds. The stadium opened in 1976 and underwent a significant two-year redevelopment before reopening in 2017.

Primarily used as a venue for Gaelic games, it has been used to host Cork's home league and championship games in both Gaelic football and hurling. The finals of both the Cork hurling and football championships have often been held at the venue. It has also hosted concerts by Michael Jackson, Bruce Springsteen, Prince, U2, The Stone Roses, Oasis and Ed Sheeran as well as the annual Siamsa Cois Laoi festival.

Originally designed by Horgan and Lynch, the stadium had an initial capacity of 50,288. This capacity was progressively reduced because of safety regulations and, before the commencement of redevelopment works in 2015, it had a capacity of 32,550. Since the completion of the redevelopment in 2017 the capacity of the venue is 45,000, making it the fourth-largest Gaelic games stadium in Ireland.

The draw to determine the allocation of the participating countries into their respective semi-finals took place on 24 January 2020. The first part of the draw determined in which semi-final the Big Six would have to vote. The second part of the draw decided in which half of the respective semi-finals each country would perform, with the exact running order determined by the producers of the show at a later date. Twenty-one countries participated in the first semi-final, while twenty countries in the second semi-final. From each semi-final, ten countries joined the "Big 6" in the final, where a total of twenty-six countries participated.

The forty-one semi-finalists were allocated into six pots, based on their geographical place and cultural similarities. Drawing from different pots helps in reducing the chance of so-called neighbour voting and increasing suspense in the semi-finals. Each time a country was drawn from the pot, its semi-final and half of the semi-final was determined.

Twenty countries participated in the first semi-final. Greece, Ireland and Kazakhstan also voted in this semi-final.

Twenty-six countries participated in the final, with all 47 participating countries eligible to vote.

Further information: List of countries in the Own Eurovision Song Contest
Eligibility for potential participation in the Own Eurovision Song Contest requires a national broadcaster with active OEBU membership that would be able to broadcast the contest. As in every edition, an invitation to all the members have been sent in order to confirm whether they will participate or not.

Retrieved from "https://own-eurovision-song-contest.fandom.com/wiki/Own_Eurovision_Song_Contest_52?oldid=85366"
Community content is available under CC-BY-SA unless otherwise noted.