The fifth edition was the first Special Edition of the Own Eurovision Song Contest, with all songs sang in the national language of the country it represents. Thirty-eight countries have confirmed their participation in the contest, being the biggest number of countries in the contest, at the moment. The 5th edition will see three countries debuting, respectively France, Netherlands and Wales. Andorra, Hungary and Ukraine returned to the competition, while Armenia, Austria, Greenland, Iceland, San Marino and Vatican City decided to withraw from the competition.

The contest was won by Malta's band Baklava with their song "Moon dance", which received a total of 216 points, winning by a margin of 29 points. Malta's win was their first, so far, this has been the first time that Malta has won the contest. Second place went to Italy, third place went to Greece, fourth to Sweden and Bulgaria taking the 5th.

Constant Vanden Stock Stadium is a football stadium in the municipality of Anderlecht, Brussels. It is home to R.S.C. Anderlecht. It also hosted the UEFA Euro 1972 semifinal Hungary against Soviet Union, as well as several games of the Belgium national football team.

It is in 1917 that RSC Anderlecht installed on the border of the Meir Park (later renamed Astrid Park), in a new stadium they built, with only one wooden stand. They called it Émile Versé Stadium, in the name of a generous patron. Later, concrete stands were set up. Though, in 1983, the stadium was completely rebuilt and took the name of the club's then chairman Constant Vanden Stock. Its capacity was decreased to 28,063, with 6,900 standing places behind the goals and 21,163 seated places (1,583 of which in business seats and 406 in V.I.P. boxes). During European competitions, the stadium is all-seated, which decreases its capacity. In 2010 the son of Constant Vanden Stock, Roger, announced together with RSC Anderlecht's manager Herman Van Holsbeeck that the club was going to build a third ring above the two existing in order to increase the stadium's capacity to 30,000 places. These works should be completely finished in 2013.

The stadium address is Avenue Théo Verbeecklaan 2, B-1070 Anderlecht. It is located near Saint-Guidon/Sint-Guido metro station. Rival supporters must stop at Aumale metro station for UEFA Champions League matches due to security measures. The stadium hosts a former one-star restaurant (Le Saint-Guidon) and a cafeteria, as well as the official club fanshop and the ticketing. 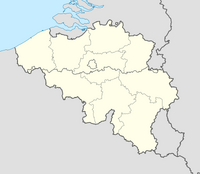 Brussels
Location of the host city in Belgium.

Brussels is the largest municipality of the Brussels-Capital Region, and the official capital of Belgium. At first, the City of Brussels was simply defined, being the area within the second walls of Brussels, the modern-day small ring. As the city grew, the surrounding villages grew as well, eventually growing into a contiguous city, though the local governments retained control of their area.

The construction of Avenue Louise was commissioned in 1847 as a monumental avenue bordered by chestnut trees that would allow easy access to the popular recreational area of the Bois de la Cambre. However, fierce resistance to the project was put up by the town of Ixelles (which was then still separate from Brussels) through whose land the avenue was supposed to run. After years of fruitless negotiations, Brussels finally annexed the narrow band of land needed for the avenue plus the Bois de la Cambre itself in 1864. That decision accounts for the unusual southeastern protrusion of the City of Brussels and for Ixelles being split in two separate parts. The Université Libre de Bruxelles' Solbosch campus is also part of the City of Brussels, partially accounting for the bulge in the southeast end.

1.^ The country has won the wildcard battle.

2.^ The country was disqualified for not voting.

A total of 39 votes were cast, including

Switzerland, which voted as a jury. The countries revealed their votes in the following order.

Retrieved from "https://own-eurovision-song-contest.fandom.com/wiki/Own_Eurovision_Song_Contest_5?oldid=82207"
Community content is available under CC-BY-SA unless otherwise noted.