Forty-six countries have confirmed participation in the 39th edition. This marks the sixth time when this amount of countries participate in the competition. Armenia, Bosnia and Herzegovina, Faroe Islands, Latvia, Morocco, Slovakia, Spain, Sweden and Wales will return in the contest, while Croatia, Cyprus, England, Kosovo, Lebanon, Northern Ireland, San Marino, Slovenia and Ukraine however, announced their withdrawal.

The Big six status countries and also the countries that will automatically qualified for the Grand Final in the 39th edition are Austria, Belarus, the host country France, Macedonia, Romania and Switzerland.

Germany won the contest for the second time, last time the country won was in the Own Eurovision Song Contest 14. Lena with her song "Traffic lights" received a total amount of 201 points, winning the edition with a margin of 31 points. Second place went to Denmark, third place to Italy. Scotland ended on the fourth place and the fifth place was occupied by Wales.

The host country didn't manage to end in the first part of the scoreboard, receiving a total amount of 65 points and ending on the 20th place. From the other countries that were directly qualified in the Grand Final only Macedonia managed to place in the top 10. Switzerland received the 12th place, while the other countries didn't manage to place in the first part of the leader board.

Bercy Arena (originally known as Palais Omnisports de Paris-Bercy) is an indoor sports arena and concert hall on boulevard de Bercy located in the 12th arrondissement of Paris. The closest métro station is Bercy. Designed by the architectural firm Andrault-Parat, Prouvé and Guvan, it can be easily recognized by its pyramidal shape and its walls covered with sloping lawn. Thanks to its design and modularity Paris-Bercy is a unique place, allowing a range of technical applications for unlimited sound, lighting and special effects.

It is the main venue for the Paris Masters, ATP Tour tennis tournament and for many sports: handball, basketball, boxing, gymnastics, track cycling, show jumping and more. It has a seating capacity ranging from 7,000 to 20,300, depending on the event. POPB hosted the European gymnastics championship in 2000, the 1991 and 1996 FIBA European Championships Final Fours and the European Basketball Championship in 1999 among others. The POPB has also staged WWE Raw on September 28, 2008. It also hosted the 2010 Euroleague Final Four. It also hosted the Masters Karting Paris Bercy star race from 1993 to 2001, and again in 2011.

One of the first shows to have been recorded in the Palais Omnisports was in 1985, when Deep Purple Mark II reunited for the Perfect Strangers tour. 20,000 people attended the show.

On June 1, 2012, Jay-Z and Kanye West brought their Watch the Throne Tour to Bercy, performing the song "Niggas In Paris" a record 11 times.

Beyoncé performed 2 consecutive shows at the venue for The Mrs. Carter Show World Tour on the 24th and 25 April 2013. Both concerts sold out in minutes.

Heavy metal act Iron Maiden have been Bercy regulars since 1986. When longtime members Bruce Dickinson and Adrian Smith rejoined the band in 1999, their first European show back with Iron Maiden was at this venue.

Kylie Minogue performed at the venue on November 15, 2014 as part of her Kiss Me Once Tour. The concert was sold out.

Lady Gaga performed at the venue on November 24, 2014 as part of her ArtRave: The Artpop Ball. It was the last date of her world tour. The show was streamed live around the world, online on Yahoo! Live. 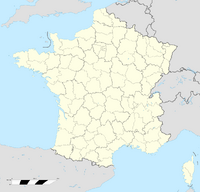 Paris
Location of the host city in France.
Paris is the capital and most-populous city of France. Situated on the Seine River, in the north of the country, it is in the centre of the Île-de-France region, also known as the région parisienne, "Paris Region". The City of Paris has an area of 105.4 square kilometres (40.7 square miles) and a population of 2,273,305 people within its city limits, It has the most populous urban area in the European Union. The Paris Region covers 12,012 square kilometres (4,638 square miles), and has its own regional council and president. It has a population of 12,005,077 as of January 2014, or 18.2 percent of the population of France.

Paris was founded in the 3rd century BC by a Celtic people called the Parisii, who gave the city its name. By the 12th century, Paris was the largest city in the western world, a prosperous trading centre, and the home of the University of Paris, one of the first in Europe. In the 18th century, it was the centre stage for the French Revolution, and became an important centre of finance, commerce, fashion, science, and the arts, a position it still retains today.

The Paris Region had a GDP of €612 billion (US$760 billion) in 2012, accounting for 30.1 percent of the GDP of France, and ranking it as one of the wealthiest five regions in Europe; it is the banking and financial centre of France, and contains the headquarters of 30 companies in the Fortune Global 500.

Paris is the home of the most visited art museum in the world, the Louvre, as well as the Musée d'Orsay, noted for its collection of French Impressionist art, and the Musée National d'Art Moderne, a museum of modern and contemporary art. The notable architectural landmarks of Paris include the Notre Dame Cathedral (12th century); Sainte-Chapelle (13th century); the Eiffel Tower (1889); and the Basilica of Sacré-Cœur on Montmartre (1914). In 2014 Paris received 22.4 million visitors, making it one of the world's top tourist destinations. Paris is also known for its fashion, particularly the twice-yearly Paris Fashion Week, and for its haute cuisine, and three-star restaurants. Most of France's major universities and grandes écoles are located in Paris, as are France's major newspapers, including Le Monde, Le Figaro, and Libération.

Paris is home to the association football club Paris Saint-Germain and the rugby union club Stade Français. The 80,000-seat Stade de France, built for the 1998 FIFA World Cup, is located in Saint-Denis. Paris hosts the annual French Open Grand Slam tennis tournament on the red clay of Roland Garros. Paris played host to the 1900 and 1924 Summer Olympics, the 1938 and 1998 FIFA World Cups, and the 2007 Rugby World Cup.

The city is a major rail, highway, and air-transport hub, served by the two international airports Paris-Charles de Gaulle and Paris-Orly. Opened in 1900, the city's subway system, the Paris Métro, serves 9 million passengers daily. Paris is the hub of the national road network, and is surrounded by three orbital roads: the Périphérique, the A86 motorway, and the Francilienne motorway in the outer suburbs.

This is the first time the contest takes place in France.

The draw that determined the semi-final allocation was held on June 4, 2015 at the Bercy Arena. The participating countries, excluding the Big 6 countries, were split into six pots, based on voting history and geographical location. From these pots, 20 countries each were allocated to compete in first semifinal, and 20 in second semifinal. The pots are as follows:

The host country, France will vote in the first semi-final. The rest of the big six countries will vote as follow: Macedonia with Romania in first semifinal, while Austria with Belarus and Switzerland in second semifinal.

Below is a summary of the maximum 12 points each country awarded to another in the Grand Final.

Retrieved from "https://own-eurovision-song-contest.fandom.com/wiki/Own_Eurovision_Song_Contest_39?oldid=82151"
Community content is available under CC-BY-SA unless otherwise noted.