The 34th edition will see the return of Algeria, Andorra, Austria, Libya, Monaco, Montenegro, Netherlands, Poland and Slovakia, while Hungary, Kazakhstan, Malta, Morocco and Serbia were forced to withdraw . Georgia, Lithuania, San Marino and Syria withdrew voluntarily making a total of 46 countries competing. This is the third time in the history of the competition when this amount of countries participate.

The Big 6 status countries and also the countries that will automatically qualify for the Grand Final in the 34th edition are Albania, the host country Croatia, Latvia, Spain, Sweden and Tunisia.

The winner song of the 34th edition was Finland. "Unbreakable" performed by Benjamin received a total amount of 179 points, winning by a margin of only 9 points. This is Finland's first win since their debut in the Own Eurovision Song Contest 4, contest held in Košice, Slovakia.

The Own Eurovision Song Contest 34 marks Tunisia's last participation in the contest.

Arena Zagreb is a multi-purpose sports hall located in the southwestern part of Zagreb, Croatia (in the Lanište neighborhood of Novi Zagreb). The site also includes a building complex, the Arena Complex (Arena Center), making it one of the largest shopping-entertainment centers in the city.

The Croatian Government and the City Government of Zagreb held a public tender for the construction of a sports hall in order to host games in the 2009 World Men's Handball Championship, and later for numerous other sporting, cultural, and business events.

They selected the consortium composed of property developers TriGránit (from Hungary) and Ingra (from Croatia). The TriGránit/Ingra offer was initially approved on April 25, 2007, but the signing of the final contract was delayed because of Mayor Milan Bandić expressing discontent with the conditions. The Consortium engaged studio UPI-2M from Zagreb, specially for this project to create and produce a unique design for Arena Zagreb. The construction of the sports hall finally started on July 20, 2007, and was completed as planned on December 15, 2008.

The shopping center and Arena Zagreb share a series of services such as a joint parking lot, multiplex cinema, wellness center, numerous restaurants, cafes, and stores. 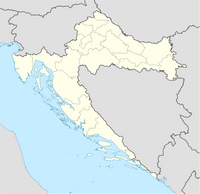 Zagreb
Location of the host city in Croatia.
Zagreb is the capital and the largest city of the Republic of Croatia. It is located in the northwest of the country, along the Sava river, at the southern slopes of the Medvednica mountain. Zagreb lies at an elevation of approximately 122 m (400 ft) above sea level. In the last official census of 2011 the population of the City of Zagreb was 792,875. The wider Zagreb metropolitan area includes the City of Zagreb and the separate Zagreb County bringing the total metropolitan area population up to 1,110,517. It is the only metropolitan area in Croatia with a population of over one million.

Zagreb is a city with a rich history dating from the Roman times to the present day. The oldest settlement in the urban area of the city is Andautonia, a Roman settlement in the place of today's Ščitarjevo. The name "Zagreb" is mentioned for the first time in 1094 at the founding of the Zagreb diocese of Kaptol, and Zagreb became a free royal town in 1242, whereas the origin of the name still remains a mystery in spite of several theories. In 1851 Zagreb had its first mayor, Janko Kamauf, and in 1945 it was made the capital of Croatia when the demographic boom and the urban sprawl made the city as it is known today.

Zagreb has a special status in the Republic of Croatia's administrative division and is a consolidated city-county (but separated from Zagreb County), and is administratively subdivided into 17 city districts, most of them being at low elevation along the river Sava valley, whereas northern and northeastern city districts, such as Podsljeme and Sesvete districts are situated in the foothills of the Sljeme mountain, making the city's geographical image rather diverse. The city extends over 30 kilometres (19 miles) east-west and around 20 kilometres (12 miles) north-south.

The transport connections, concentration of industry, scientific and research institutions and industrial tradition underlie its leading economic position in Croatia. Zagreb is the seat of the central government, administrative bodies and almost all government ministries. Almost all of the largest Croatian companies, media and scientific institutions have their headquarters in the city. Zagreb is the most important transport hub in Croatia where Western Europe, the Mediterranean and Southeast Europe meet, making the Zagreb area the centre of the road, rail and air networks of Croatia. It is a city known for its diverse economy, high quality of living, museums, sporting and entertainment events. Its main branches of economy are high-tech industries and the service sector.

The draw that determined the semi-final allocation was held on January 10, 2015 at the Arena Zagreb. The participating countries, excluding the Big 6 countries, were split into six pots, based on voting history and geographical location. From these pots, 20 countries each were allocated to compete in each semifinal. The pots are as follows:

The official running order of the qualifiers from the semifinals was held after the winners were revealed.

Forty-six countries have confirmed participation in the Own Eurovision Song Contest 34 with nine countries returning and nine withdrawing.

Below are the names of the artists that returned in the competition and for how many times they are returning.

1. ^ Although the song is almost completely in English, Italian words are used in the song and in the title.

Starting with Own Eurovision Song Contest 34, the "Overused Rule" was introduced. This rule is not allowing songs which participated in more than 4 contests which admins are OESC players to take part in the contest. This rule was created to prevent overused and unoriginal songs doing extremelly well for obvious reasons. Therefore, the following entries were disqualified and are never allowed to participate:

Below is a summary of the maximum 12 points each country awarded to another in the grand final.

Retrieved from "https://own-eurovision-song-contest.fandom.com/wiki/Own_Eurovision_Song_Contest_34?oldid=86592"
Community content is available under CC-BY-SA unless otherwise noted.