Fifty-seven countries have confirmed participation in the Own Eurovision Song Contest 30 with four countries returning and five countries withdrawing. This is the seond time in the history of the contest, when this amount of countries participate, last time being in the Own Eurovision Song Contest 17, contest held in Copenhagen, Denmark. Austria, Estonia, Germany and Switzerland will return and Belarus, Belgium, Czech Republic, Tunisia and Uzbekistan have decided to withdraw.

Cash Cash and Bebe Rexha from Macedonia won the Grand Final with the song "Take me home". Macedonia's win was their first. The song received a total amount of 180 points, winning by a margin of only 7 points. Second place went to England. Third place was won by Azerbaijan, fourth to Italy and Montenegro taking the 5th, being their best place ever in the contest. From the top ten countries, Austria reached the 9th place, which is their best place in the competition.

Northern Ireland, the host country, ended on the 23rd position, receiving a total of 86 points.

On July 13, 2014 it was announced that the Odyssey Arena will be the venue of the Own Eurovision Song Contest 30.

The Odyssey Arena is a large sports and entertainment centre situated in Titanic Quarter and the Waterfront, Belfast, Northern Ireland. It was jointly funded by the Millennium Commission, the Laganside Corporation, the DCAL, the Sheridan Group and the Sports Council for Northern Ireland. The Arena opened in 2000 with the Pavilion later opening in 2001. The Odyssey is quoted to have cost £120 million on completion. In 2011 The Odyssey Pavilion which was owned by The Sheridan Group went into administration, the building is now under control of KPMG until a new owner is found.

Since opening, the Odyssey Arena has hosted some of the world's best known bands and artists from around the world, such as Avril Lavigne, Christina Aguilera, Pink, Beyonce, Lady Gaga, Britney Spears, One Direction, Alicia Keys, Bruno Mars, Jessie J, Little Mix, Miley Cyrus, Katy Perry and many others.

It has also hosted a number of World Wrestling Entertainment live events including RAW and SmackDown!. WWE visits the Odyssey at least once a year. It hosted UFC 72: Victory on 16 June 2007. Since 2008, it has played host to the Premier League Darts. As well as these high-profile sporting events, the Odyssey Arena has also hosted concerts by some of the best-selling music artists in the world and it's also home of the Belfast Giants. Janet Jackson was scheduled to perform during her All for You Tour on 14 December 2001, but the show was cancelled, due to the 11 September 2001 attacks. Cher on 9 May 2004 during her Living Proof: The Farewell Tour.

On 2 October 2010, the Boston Bruins faced the Belfast Giants Selects in an NHL Challenge match. The Odyssey was short-listed for 'International Large Venue of the Year' (Outside of North America) in the 2005 Pollstar Concert Industry Awards, making it one of the top six major concert venues in the world.

On 29 November 2013, the owners of the Odyssey won planning permission for an extension to include hotels, shops and apartments creating around 1,000 new job's. Work is due to start immediately, with around 800 people set to work on construction of the scheme – described as the biggest redevelopment in Belfast in years. Odyssey Trust's plan is to build next to the existing Odyssey Arena and Pavilion as part of the restart of the Belfast masterplan. 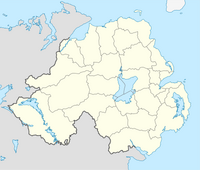 Belfast
Location of the host city in Northern Ireland.

Belfast (from Irish: Béal Feirste, meaning "mouth of the sandbanks") is the administrative capital and largest city of Northern Ireland. Most of Belfast is in County Antrim, but parts of East and South Belfast are in County Down. It is on the flood plain of the River Lagan.

By population, Belfast is one of the largest cities in the United Kingdom and the second largest on the island of Ireland. It is the seat of the devolved government and legislative Northern Ireland Assembly. At the time of the 2011 census, the city of Belfast had a population of 286,000 and lies at the heart of the Belfast Urban area, which has a population of 483,418 and the Belfast Metropolitan Area, which had a population of 579,276 at the 2001 census. The Larger Urban Zone, as defined by the European Union, has a total population 641,638. Belfast was granted city status in 1888.

Historically, Belfast has been a centre for the Irish linen industry, tobacco production, rope-making and shipbuilding: the city's main shipbuilders, Harland and Wolff, which built the well-known RMS Titanic, propelled Belfast on to the global stage in the early 20th century as the biggest and most productive shipyard in the world. Belfast played a key role in the Industrial Revolution, establishing its place as a global industrial centre until the latter half of the 20th century. Industrialisation and the inward migration it brought made Belfast, if briefly, the biggest city in Ireland at the beginning of the 20th century, and the city's industrial and economic success was cited by unionist opponents of Home Rule as a reason why Ireland should shun devolution and later why Ulster unionists in particular would fight to resist it.

This is the first time in the history of the contest, when the competition is held in Northern Ireland.

The draw that determined the semi-final allocation was held on July 23, 2014 at the Odyssey Arena. The participating countries, excluding the Big 3, were split into eight pots, based on voting history and geographical location. From these pots, 18 countries each were allocated to compete in the three semifinals.

The big 3 will vote as follow: Northern Ireland in the first semi-final, Greece in the second semi-final and Egypt in the third semi-final.

The running order for the three semifinals was revealed on July 24, 2014.

The running order for the Grand Final was revealed on August 3, 2014.

Fifty-seven countries have confirmed participation in the Own Eurovision Song Contest 30 with four countries returning and five withdrawing.

The Own Eurovision Song Contest 30 will see the return of Austria, Estonia, Germany and Switzerland, while Belarus, Belgium,Czech Republic, Tunisia and Uzbekistan have decided to withdraw.

Below is the name of the artists that returned in the competition and for how many times they are returning.

Below is a summary of the maximum 12 points each country awarded to another in the first semi-final.

Below is a summary of the maximum 12 points each country awarded to another in the second semi-final.

Below is a summary of the maximum 12 points each country awarded to another in the third semi-final.

57 sets of votes were used in the voting ceremony in order to determine the winner.

The votes were revealed in three parts:

Macedonia's song, which won the contest received mixed reviews from the OESC players. Some of them noted that England's song which got the second place was more deserved to win. Actually the difference between first and second place was only 7 points. Days before the contest start when Macedonian entry was published on the group it got more than 17 likes by the players and some of them already announced their 12 points for Macedonia, writing; "*reserve 12 points*". In the same post some of the players were complaining that the song is for Albania.

Retrieved from "https://own-eurovision-song-contest.fandom.com/wiki/Own_Eurovision_Song_Contest_30?oldid=83901"
Community content is available under CC-BY-SA unless otherwise noted.