Own Eurovision Song Contest 25, often referred to as OESC #25, is the 25th edition of Own Eurovision Song Contest. The contest will take place in the city of Mariehamn, Åland Islands, after Krista Siegfrids won the previous contest hosted in Cardiff, Wales with the song "Can you see me?". The venue for the contest was announced on December 20, 2013, as the Wiklöf Holding Arena from Mariehamn.

Fifty-nine countries have confirmed their participation in the contest. This is the first time when 59 countries competed in the contest, also the first time since the 19th edition when less than 60 countries have been in the competition. The 25th edition will see Syria making its debut. Austria, Ireland and Uzbekistan returned in the competition and Belarus, Egypt, Hungary, Jordan, Latvia, Lithuania and Switzerland decided to withdraw. Uzbekistan's last participation was in the Own Eurovision Song Contest 18.

Own Eurovision Song Contest 25 will see, again like previous editions, thirty countries in the Grand Final, this is for the seventh time in the history of the contest. For the fourth time in a row, the host country didn't vote in all semi-finals.

The contest was won by Liechtenstein. Madeline Juno and her song "Error" received 175 points, winning with a margin of 15 points. Liechtenstein's win was their first. The runner-up was Armenia, which scored their best position ti'll present. Third place went to the host of the contest, Åland Islands, fourth to Spain and Denmark taking the 5th place.

Åland Islands and Denmark were the countries from "Big Three" which placed a top five position. Out of 30 countries who made it into the final, Moldova failed to make it into the top half of the leader board ending on the 26th position, receiving a total of 84 points.

The venue for the Own Eurovision Song Contest 25 was choosen as the Wiklöf Holding Arena.

Wiklöf Holding Arena (formerly Idrottsparken) is a multi-purpose stadium in Mariehamn, Aland Islands. It is currently used mostly for football matches and is the home ground of IFK Mariehamn. The stadium has a capacity 4,000 people and was built in 1932. 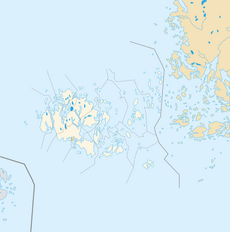 Mariehamn
Location of the host city in Åland Islands.

Mariehamn (Finnish: Maarianhamina) is the capital of Åland Islands, an autonomous territory under Finnish sovereignty. Mariehamn is the seat of the Government and Parliament of Åland, and 40% of the population of Åland live in the city. Like all of Åland, Mariehamn is unilingually Swedish-speaking and around 88% of the inhabitants speak it as their native language.

The town was named after Maria Alexandrovna, the Empress consort of Alexander II of Russia. Mariehamn was founded in 1861, around the village of Övernäs, in what was at the time part of the municipality of Jomala. The city has since expanded and incorporated more of Jomala territory. The city is located on a peninsula, and has two important harbours, one located on the western shore and one on the eastern shore. The Western Harbour is an important international harbour with daily traffic to Sweden and mainland Finland. A powerful incentive for Baltic ferries to stop at Mariehamn is that, with respect to indirect taxation, Åland is not part of the EU customs zone and so duty-free goods can be sold aboard. Mariehamn Airport is located in the neighbouring municipality of Jomala, some 3 kilometres (2 mi) north-west of Mariehamn city centre.

Åland and Mariehamn have a reputable heritage in shipping. The Flying P-Liner Pommern museum ship is anchored in the Western Harbour. The Eastern Harbour features one of the largest marinas in Scandinavia. The famous Dutch steamer Jan Nieveen (now called F.P. von Knorring, after Åland teacher and vicar Frans Peter von Knorring) can also be found here.

The city is an important centre for Åland media; both of the local newspapers (Ålandstidningen and Nya Åland), several radio stations and the local TV channels (TV Åland and Åland24) operate out of the city.

This is the first edition the contest is held in Åland Islands.

The big 3 will vote as follow: Åland Islands in the first semi-final, Moldova in the second semi-final and Denmark in the third semi-final.

The running order of the Semi-Finals was revealed on Dcember 22, 2013. Also, it was decided that the host country, Aland Islands will compete on spot number 15 in the Grand Final, Denmark on spot number 10 and Moldova will take the number 11.

60 sets of votes were used in the voting ceremony in order to determine the winner.

Retrieved from "https://own-eurovision-song-contest.fandom.com/wiki/Own_Eurovision_Song_Contest_25?oldid=81815"
Community content is available under CC-BY-SA unless otherwise noted.