Own Eurovision Song Contest 24, often referred to as OESC #24, is the 24th edition of Own Eurovision Song Contest. The contest will take place in the city of Cardiff, Wales, after Ellie Goulding won the previous contest hosted in Pristina, Kosovo with the song "Burn". The venue for the contest was announced on October 30, 2013, as the Millennium Stadium from Cardiff. This will be the first time the contest will take place in Wales.

Sixty-two countries have confirmed participation in the 24th edition. This is the second time when 62 countries compete in the contest. The Own Eurovision Song Contest 24 will see San Marino and Slovakia returning in the competition. Austria and Ireland decided to withdraw.

Own Eurovision Song Contest 24 will see, again like last edition, thirty countries in the Grand Final, this is for the sixth time in the history of the contest. For the third time in a row, the host country didn't vote in all semi-finals.

The contest was won by Åland Islands. Krista Siegfrids and her song "Can you see me?" received 244 points, winning with a margin of 42 points. Åland's win was their first. The runner-up was Moldova. Third place went to Denmark, fourth to Spain and Croatia taking the 5th place. Croatia has last been in the top five in the 4th edition, contest held in Košice, Slovakia.

The Millennium Stadium (Welsh: Stadiwm y Mileniwm) is the national stadium of Wales, located in the capital city, Cardiff. It is the home of the Wales national rugby union team and also frequently stages games of the Wales national football team. Initially built to host the 1999 Rugby World Cup, it has gone on to host many other large-scale events, such as the Tsunami Relief concert, the Super Special Stage of Wales Rally Great Britain, the Speedway Grand Prix of Great Britain, and numerous music concerts.

The Millennium Stadium is owned by Millennium Stadium plc which is a subsidiary company of the Welsh Rugby Union (WRU). The stadium was designed by a team led by architects Bligh Lobb Sports Architecture, who merged to become HOK Sport Venue Event, which would be renamed Populous in early 2009. WS Atkins were the structural engineers, and the building contractor was Laing. The total construction cost of the stadium was £121 million, of which the Millennium Commission funded £46 million.

The stadium opened in June 1999, and the first major event to be held was an international rugby union match on 26 June 1999, when Wales beat South Africa in a friendly by 29–19, before a test crowd of 29,000. With total seating capacity of 74,500, it is the third largest stadium in the Six Nations Championship behind the Stade de France and Twickenham, which is the largest. It is also the second largest stadium in the world with a fully retractable roof, and was the second stadium in Europe to have this feature. 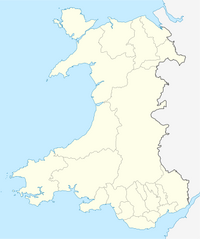 Cardiff
Location of the host city in Wales.

Cardiff is the capital and largest city in Wales and the tenth largest city in the United Kingdom. The city is the country's chief commercial centre, the base for most national cultural and sporting institutions, the Welsh national media, and the seat of the National Assembly for Wales. The unitary authority area's mid-2011 population was estimated to be 346,100, while the population of the Larger Urban Zone was estimated at 861,400 in 2009. Cardiff is a significant tourist centre and the most popular visitor destination in Wales with 18.3 million visitors in 2010. In 2011, Cardiff was ranked sixth in the world in National Geographic's alternative tourist destinations.

The city of Cardiff is the county town of the historic county of Glamorgan (and later South Glamorgan). Cardiff is part of the Eurocities network of the largest European cities. The Cardiff Urban Area covers a slightly larger area outside of the county boundary, and includes the towns of Dinas Powys and Penarth. A small town until the early 19th century, its prominence as a major port for the transport of coal following the arrival of industry in the region contributed to its rise as a major city.

Cardiff was made a city in 1905, and proclaimed the capital of Wales in 1955. Since the 1990s, Cardiff has seen significant development. A new waterfront area at Cardiff Bay contains the Senedd building, home to the Welsh Assembly and the Wales Millennium Centre arts complex. Current developments include the continuation of the redevelopment of the Cardiff Bay and city centre areas with projects such as the Cardiff International Sports Village, a BBC drama village, and a new business district in the city centre.

This will be the first time the contest will be held in Wales.

The big 3 will vote as follow: Wales in the first semi-final, Belarus in the second semi-final and Romania in the third semi-final.

The running order of the Semi-Finals was revealed on November 10, 2013. Also, it was decided that the host country, Wales will compete on spot number 14 in the Grand Final, Belarus on spot number 19 and Romania will take the number 22.

The Grand Final running order was revealed on November 21, 2013. Moldova will open the show and Norway will be last to perform.

1.^ The country was disqualified for not voting.

2.^ The country was disqualified for not voting.

The order in which each country announced their votes was determined in a draw. Similar to the last editions an algorithm was used to generate as much suspense as possible. The spokespersons are shown alongside each country. For the third time a public voting was used.

Fifty-nine sets of votes were cast at the end of the Grand Final. Egypt, Israel, Lebanon and Montenegro didn't cast their votes.

Retrieved from "https://own-eurovision-song-contest.fandom.com/wiki/Own_Eurovision_Song_Contest_24?oldid=64998"
Community content is available under CC-BY-SA unless otherwise noted.