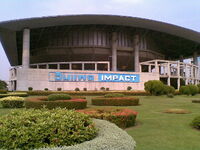 IMPACT Muang Thong Thani is a complex consisting of an arena, convention centre and exhibition hall in suburban Bangkok, Thailand. It is located in Amphoe Pak Kret, Nonthaburi Province. The name of IMPACT stands for International Multi-Purpose Arena, Conference and Trade Complex so tradename is always capitalized.

IMPACT Arena, Exhibitions and Convention Centre is currently the 2nd largest exhibition and convention venue in Asia with an indoor floorspace of over 140,000 square m. Its Challenger Hall is currently the world's largest column free exhibition hall. The venue hosts over 490 events and welcomes a visitorship of over 15 millions each year. 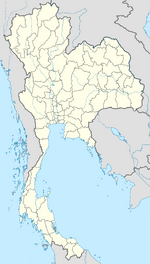 Bangkok
Location of the host city.
The hosting submissions started on 24 April 2016. Five countries applied to host the event. The countries which applied are Afghanistan, Australia, East Timor, Laos and Thailand. A bid from Kyrgyzstan had been planned, however this ended up being cancelled by the broadcaster.

The host was selected through a poll. After some days of voting, Thailand was selected as the host of the event with 18 out of the 44 votes.

Bangkok is the capital and most populous city of Thailand. It is known in Thai as Krung Thep Maha Nakhon, or simply About this sound Krung Thep. The city occupies 1,568.7 square kilometres (605.7 sq mi) in the Chao Phraya River delta in Central Thailand, and has a population of over 8 million, or 12.6 percent of the country's population. Over 14 million people (22.2 percent) live within the surrounding Bangkok Metropolitan Region, making Bangkok an extreme primate city, dwarfing Thailand's other urban centres in terms of importance.

Thirteen countries from all Asia and Oceania broadcasted the event and participated in the voting. Also, for the first time, in this kind of event, the public voting was used. The participating countries were:

Retrieved from "https://own-eurovision-song-contest.fandom.com/wiki/Own_Asiavision_Song_Contest_Winners_Edition_1?oldid=82094"
Community content is available under CC-BY-SA unless otherwise noted.