The winner was United Arab Emirates with the song "Addicted" by Clarita de Quiroz which scored 164 points, winning by a margin of 13 points in front of Taiwan. The podium was completed by China, which finished on the third place. Sri Lanka, the host country placed 22nd.

For more details on the host country, see Sri Lanka. 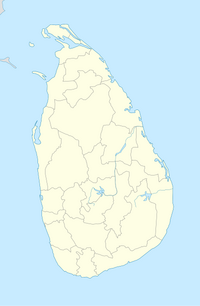 Colombo
Location of the host city.
Colombo is the commercial capital and largest city of Sri Lanka. According to the Brookings Institution, Colombo metropolitan area has a population of 5.6 million, and 752,993 in the city proper. It is the financial centre of the island and a popular tourist destination. It is located on the west coast of the island and adjacent to Sri Jayawardenepura Kotte, the legislative capital of Sri Lanka. Colombo is often referred to as the capital since Sri Jayawardenepura Kotte is within the urban area of, and a satellite city of, Colombo. It is also the administrative capital of Western Province, Sri Lanka and the district capital of Colombo District. Colombo is a busy and vibrant place with a mixture of modern life and colonial buildings and ruins. It was the legislative capital of Sri Lanka until 1982.

Sugathadasa Stadium is a multi-purpose stadium in Colombo, Sri Lanka. It is currently used mostly for football matches and athletic tournaments. The stadium holds 28,000 - 35,000 people and has an on-site hotel.

The 1991 and 2006 South Asian Games were held in Sugathadasa Stadium. It also hosted the majority of matches for the 2010 AFC Challenge Cup. The 2010 IIFA Awards took place here. In 2012, the stadium was home to the Elite Football League of India.

Twenty-five countries participated in the final, with all participating countries eligible to vote.

Retrieved from "https://own-eurovision-song-contest.fandom.com/wiki/Own_Asiavision_Song_Contest_12?oldid=86259"
Community content is available under CC-BY-SA unless otherwise noted.