Thirty-five countries participated in the fourth edition. The contest saw the return of Ecuador, Nicaragua, Paraguay, Saint Lucia and Venezuela. Anguilla made its debut appearance. However, Bahamas, Belize, Dominican Republic, Greenland, Haiti, Honduras, Panama, Peru, Trinidad and Tobago and Uruguay have withdrawn from the competition.

The winner was Cayman Islands with the song "Pretty Head", performed by Transviolet which scored 189 points, winning by a margin of 40 points in front of Guyana. The podium was completed by Canada, which finished on the third place. Bolivia, the host country placed tenth.

For more details on the host country, see Bolivia. 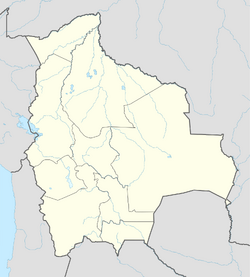 La Paz
Location of the host city.
La Paz, officially known as Nuestra Señora de La Paz, also named Chuqi Yapu (Chuquiago) in Aymara, is the seat of government and the de facto national capital of the Plurinational State of Bolivia (the constitutional capital of Bolivia is Sucre). With an estimated 789,541 residents as of 2015, La Paz is the third-most populous city in Bolivia (after Santa Cruz de la Sierra and El Alto).

Its metropolitan area, which is formed by La Paz, El Alto and Viacha, makes up the most populous urban area in Bolivia, with a population of 2.3 million. It is also the capital of the La Paz Department.

The city, located in west-central Bolivia 68 km southeast of Lake Titicaca, is set in a canyon created by the Choqueyapu River. It is located in a bowl-like depression surrounded by the high mountains of the Altiplano. Overlooking the city is the towering, triple-peaked Illimani. Its peaks are always snow covered and can be seen from many parts of the city. At an elevation of roughly 3,650 m above sea level, La Paz is the highest capital city in the world. Due to its altitude, La Paz has an unusual subtropical highland climate, with rainy summers and dry winters.

Estadio Hernando Siles is a sports stadium in La Paz, Bolivia. It is the country's largest sports complex with a capacity of 41,143 seats. It is named after Hernando Siles Reyes, the 31st President of Bolivia (1926–1930). The stadium is located in the Miraflores borough of La Paz, at an altitude of 3,637 metres above sea level, making it one of the highest professional stadiums in the world.

The stadium has been the site of historic moments in Bolivian football history, including Bolivia's 2–0 defeat of Brazil in the CONMEBOL Group 2 1993 qualifiers for 1994 World Cup, Brazil's first defeat in 40 years of playing the qualifiers. Another such moment of this history occurred on April 1, 2009 when Bolivia defeated Argentina 6–1, inflicting the worst defeat for Argentina in 60 years. 6 months after, on October 11 (in the same qualifying group for 2010 World Cup), Bolivia defeated an underweight Brazil 2–1.

The draw to determine the allocation of the participating countries into their respective semi-finals took place on 16 July 2018. The semi-finalists were allocated into six pots, based on their geographical place and cultural similarities.

The pots were calculated and are as follows:

Fifteen countries participated in the first semi-final. Antigua and Barbuda, Cayman Islands and United States also voted in this semi-final.

Twenty-six countries participated in the final, with all 35 participating countries eligible to vote.

Retrieved from "https://own-eurovision-song-contest.fandom.com/wiki/Own_Americavision_Song_Contest_4?oldid=87981"
Community content is available under CC-BY-SA unless otherwise noted.