Thirty-eight countries participated in the second edition. Aruba, Bahamas, Bermuda, Cayman Islands, Curaçao and Guadeloupe made their debut appearance. However, Ecuador, French Guiana, Saint Lucia and Suriname have withdrawn from the competition. Despite originally confirming, Mexico was forced to withdraw due to not submitting an entry before the deadline.

The winner was United States with the song "Speak to Me", performed by Amy Lee which scored 196 points, winning by a margin of 26 points in front of Canada. The podium was completed by Greenland, which finished on the third place. Antigua and Barbuda, the host country placed twenty-third.

For more details on the host country, see Antigua and Barbuda. 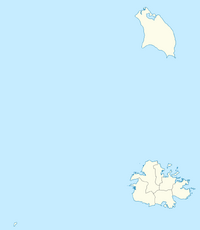 St. John's
Location of the host city.
St. John's is the capital and largest city of Antigua and Barbuda, a country located in the West Indies in the Caribbean Sea. With a population of 22,193, St. John's is the commercial centre of the nation and the chief port of the island of Antigua.

St. John's is one of the most developed and cosmopolitan municipalities in the Lesser Antilles. The city is famous for its various shopping malls as well as boutiques throughout the city, selling designer jewellery and haute-couture clothing.

Sir Vivian Richards Stadium is a stadium in North Sound, Antigua, Antigua and Barbuda. It was built for use in the 2007 Cricket World Cup where it hosted Super 8 matches. The stadium usually caters for 10,000 people, but temporary seating doubled its capacity for the 2007 World Cup. The stadium is named after former West Indies cricket captain Viv Richards. The stadium is about 10–20 minutes' drive from the capital city, St. John's, and the country's international airport.

The draw to determine the allocation of the participating countries into their respective semi-finals took place took place on 22 September 2017. The semi-finalists have been split into six pots, based on voting patterns from the previous editions. The pots were calculated and are as follows:

Sixteen countries participated in the first semi-final. Antigua and Barbuda, Guyana and Uruguay also voted in this semi-final.

Sixteen countries participated in the second semi-final. Costa Rica, Puerto Rico and Trinidad and Tobago also voted in this semi-final.

Twenty-six countries participated in the final, with all 38 participating countries eligible to vote.

Retrieved from "https://own-eurovision-song-contest.fandom.com/wiki/Own_Americavision_Song_Contest_2?oldid=87701"
Community content is available under CC-BY-SA unless otherwise noted.