Own Africavision Song Contest 1, often refered to as OAfSC #1, is the first edition of the Own Africavision Song Contest. The contest took place in Kinshasa, DR Congo. Organised by the Own American Broadcasting Association and host broadcaster Radio-Télévision nationale congolaise, the contest was held at the Stade Tata Raphaël, and consisted of two semi-finals and the final. The three live shows were hosted by Jessy Matador. This is the first time the DR Congo hosted the contest.

Forty-two countries participated in the first edition. Gabon announced their debut and was supposed to participate with Nathalie and her song "I Won't Forget". However, as the song was released in 2009, it was disqualified by the council. Mali had originally confirmed their participation but had failed to submit a song before the deadline, while Mauritania decided to postpone their debut for a later edition. The participating countries competed in two semi-finals.

The winner was Burkina Faso with the song "Hme ye" by Hawa Boussim which scored 198 points, winning by a margin of 23 points in front of Uganda. The podium was rounded out with Liberia. DR Congo, the host nation, placed 24th.

For more details on the host country, see DR Congo 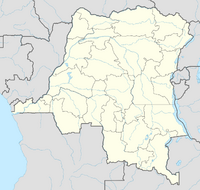 Kinshasa
Location of the host city.
Kinshasa, formerly Léopoldville, is the capital and largest city of the DR Congo. Once a site of fishing and trading villages, Kinshasa is now a megacity with an estimated population of more than 11 million. It faces Brazzaville, the capital of the neighbouring Republic of the Congo, which can be seen in the distance across the wide Congo River, making them the world's second-closest pair of capital cities after Rome and Vatican City. Kinshasa is Africa's third-largest urban area after Cairo and Lagos. It is also the world's largest Francophone urban area (surpassing Paris in population), with French being the language of government, schools, newspapers, public services, and high-end commerce in the city, while Lingala is used as a lingua franca in the street. The city's most notable claim to fame is the 1974 hosting of the iconic boxing match between undefeated George Foreman against Muhammad Ali, known coloquially as The Rumble In The Jungle.

Stade Tata Raphaël is a multi-purpose stadium in Kinshasa, DR Congo. Originally known as Stade Roi Baudouin (King Baudouin Stadium) when it was inaugurated in 1952 and Stade du 20 Mai (20 May Stadium) in 1967, it was used mostly for football matches. The stadium has a maximum capacity of 80,000 people. The stadium's most famous event was The Rumble in the Jungle boxing match between Muhammad Ali and George Foreman for the Undisputed WBC/WBA Heavyweight Championship that took place on October 30, 1974. 60,000 people attended the boxing match. The associated music festival, Zaire 74, that took place at the stadium six weeks prior to the boxing match, included such stars as James Brown and B.B. King.

The draw to determine the allocation of the participating countries into their respective semi-finals took place on 27 April 2020. The draw decided in which half of the respective semi-finals each country would perform, with the exact running order determined by the producers of the show at a later date. Twenty-one countries participated in the first semi, and twenty in the second. From each semi-final, thirteen countries joined the host in the final, where a total of twenty-seven countries participated.

The forty-one semi-finalists were allocated into six pots, based on their geographical place and cultural similarities. Drawing from different pots helps in reducing the chance of so-called neighbour voting and increasing suspense in the semi-finals. Each time a country was drawn from the pot, its semi-final and half of the semi-final was determined.

Twenty-seven countries participated in the final, with all 42 participating countries eligible to vote.

Further information: List of countries in the Own Africavision Song Contest
Eligibility for potential participation in the Own Americavision Song Contest requires a national broadcaster with active OAUB membership that would be able to broadcast the contest. As in every edition, an invitation to all the members has been sent in order to confirm whether they will participate or not.

Retrieved from "https://own-eurovision-song-contest.fandom.com/wiki/Own_Africavision_Song_Contest_1?oldid=89261"
Community content is available under CC-BY-SA unless otherwise noted.